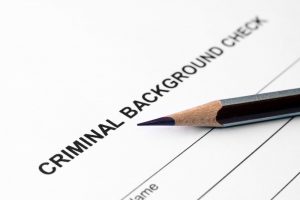 Check For a list of states that prohibit the use of arrest records over 7 years old:

Detailed Discussion of the Green Factors and Criminal Conduct Screens

Absent a validation study that meets the Uniform Guidelines’ standards, the Green factors provide the starting point for analyzing how specific criminal conduct may be linked to particular positions. The three Greenfactors are:

a. The Nature and Gravity of the Offense or Conduct

Careful consideration of the nature and gravity of the offense or conduct is the first step in determining whether a specific crime may be relevant to concerns about risks in a particular position.

The nature of the offense or conduct may be assessed with reference to the harm caused by the crime (e.g., theft causes property loss).

The legal elements of a crime also may be instructive.

For example, a conviction for felony theft may involve deception, threat, or intimidation.115 With respect to the gravity of the crime, offenses identified as misdemeanors may be less severe than those identified as felonies.

b. The Time that Has Passed Since the Offense, Conduct and/or Completion of the Sentence

While the Green court did not endorse a specific time frame for criminal conduct exclusions, it did acknowledge that permanent exclusions from all employment based on any and all offenses were not consistent with the business necessity standard. 116

Subsequently, in El, the court noted that the plaintiff might have survived summary judgment if he had presented evidence that “there is a time at which a former criminal is no longer any more likely to recidivate than the average person . . . .”117

Thus, the court recognized that the amount of time that had passed since the plaintiff’s criminal conduct occurred was probative of the risk he posed in the position in question.

Whether the duration of an exclusion will be sufficiently tailored to satisfy the business necessity standard will depend on the particular facts and circumstances of each case.

Relevant and available information to make this assessment includes, for example, studies demonstrating how much the risk of recidivism declines over a specified time.118

c. The Nature of the Job Held or Sought

Finally, it is important to identify the particular job(s) subject to the exclusion. While a factual inquiry may begin with identifying the job title, it also encompasses the nature of the job’s duties (e.g., data entry, lifting boxes), identification of the job’s essential functions, the circumstances under which the job is performed (e.g., the level of supervision, oversight, and interaction with co-workers or vulnerable individuals), and the environment in which the job’s duties are performed (e.g., out of doors, in a warehouse, in a private home).

Linking the criminal conduct to the essential functions of the position in question may assist an employer in demonstrating that its policy or practice is job related and consistent with business necessity because it “bear[s] a demonstrable relationship to successful performance of the jobs for which it was used.”119

This is in response to your letters of December 8, 1997, and December 15, 1997, requesting the views of the Commission’s staff on the following questions involving the application of the Fair Credit Reporting Act (“FCRA”) to the activities of your clients:

1. If an employer obtains only driving records and criminal records information about potential employees from a third party, is the information covered by the FCRA?

Yes. Section 603(d)(1) of the FCRA defines “consumer report” to mean any oral, written or other communication by a consumer reporting agency (CRA) (1) bearing on a consumer’s “credit worthiness, credit standing, credit capacity, character, general reputation, personal characteristics, or mode of living” which is used, expected to be used, or collected in whole or in part for the purpose of serving as a factor in establishing a consumer’s eligibility for, interalia, credit, insurance, or employment.

To be a consumer report, information in the report need relate to only one of the characteristics enumerated above.

Since driving records and criminal records do contain information about a consumer’s character, general reputation, personal characteristics, or mode of living, these types of information are covered by the definition of “consumer report.”

I have enclosed another staff opinion letter (Poquette, 6/10/98) that discusses this point.

When an employer obtains information from a CRA about the driving record or the criminal record of an individual, the employer is a “user” of information covered by the FCRA and must comply with all provisions of the FCRA that apply to users of information obtained from CRAs.

The most significant of these provisions are Sections 604(b) and 615(a), which require users of information for employment purposes to make various disclosures when adverse actions are contemplated and taken based upon consumer reports.

2. A bank subject to regulation under the Financial Reform Recovery and Enforcement Act (FIRREA) of 1989 is prohibited from hiring individuals who have, at any time in their life, been convicted of certain crimes.

May a consumer reporting agency provide to a client who is a bank information about criminal records that predates the report by more than seven years so that the bank may comply with FIRREA?

Section 605 of the FCRA limits the information that may be reported by a CRA. In particular, Section 605(a)(5) prohibits a CRA from reporting records of arrest, indictment, or conviction that, from the date of disposition, release, or parole, antedate the report by more than seven years.

However, we note that a bank or other entity that checks records on its own is not covered by the FCRA, and therefore may conduct searches without regard to the FCRA’s time limits.

I hope that this information is helpful to you.

1. It appears clear that the commercial service you describe would be a “consumer reporting agency” (i.e., the service regularly assembles or evaluates “consumer report” information for sale to third parties)